A few of my favorite things from 2020. Because even when it's bad, it's not all bad. 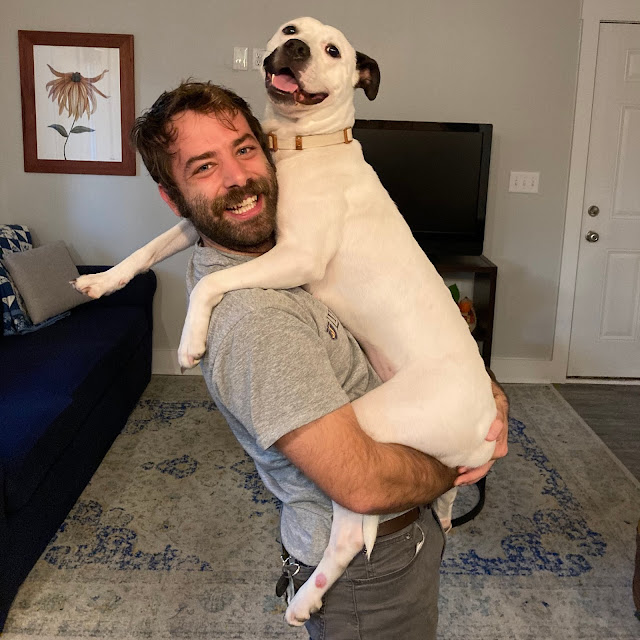 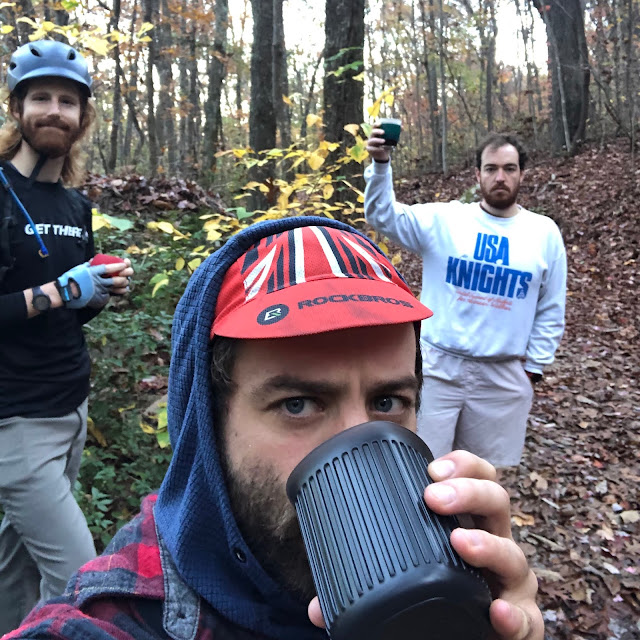 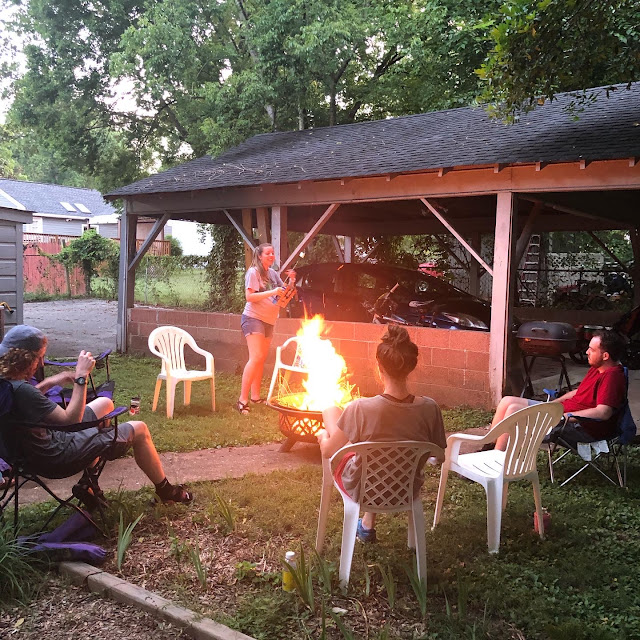 Montague Park
Cushvlogs
SLIFT, UMMON
Stand Your Ground: Black Bodies and the Justice of God by Kelly Brown Douglas
my AP US Government and Politics class
PUP the band
the Americano from Velo Coffee
the Guild Trail
this swimming hole 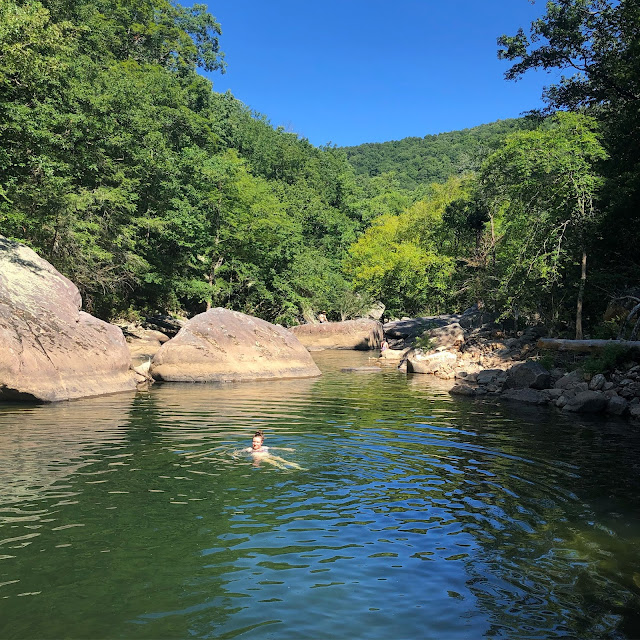 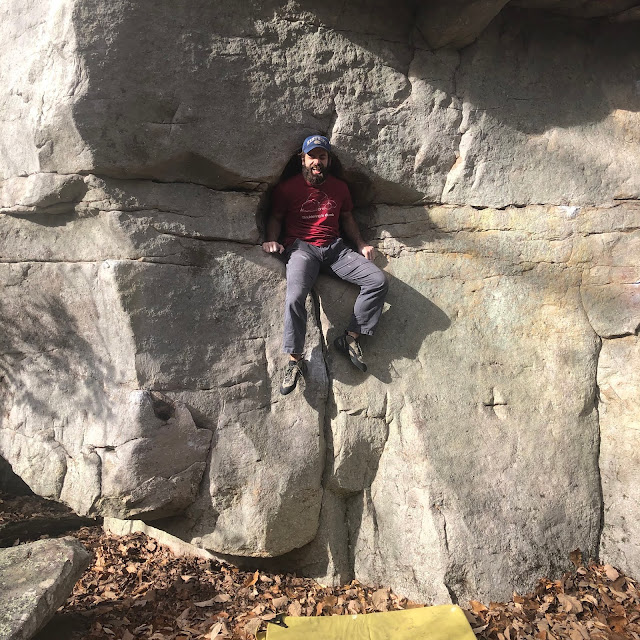 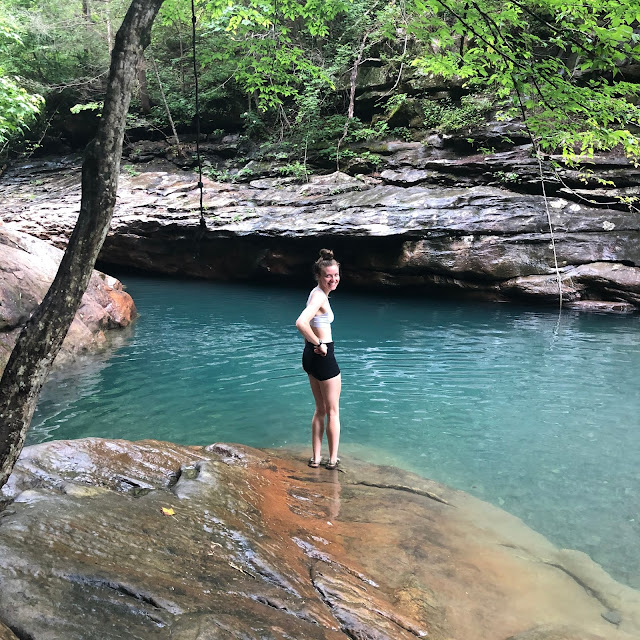 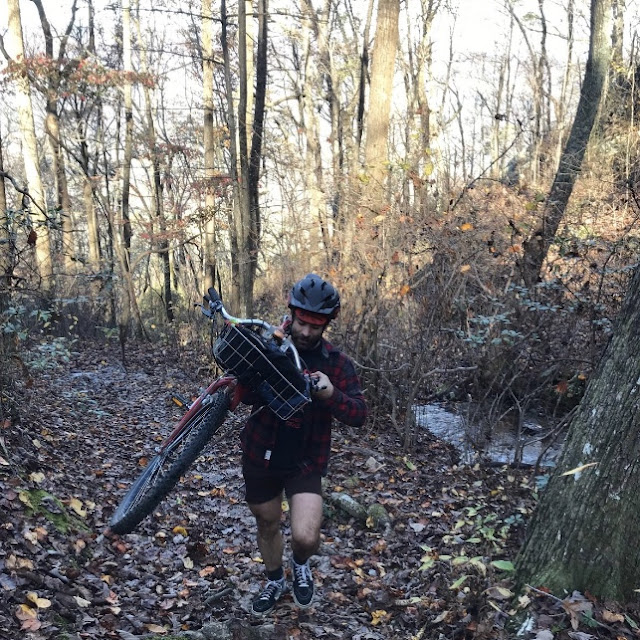 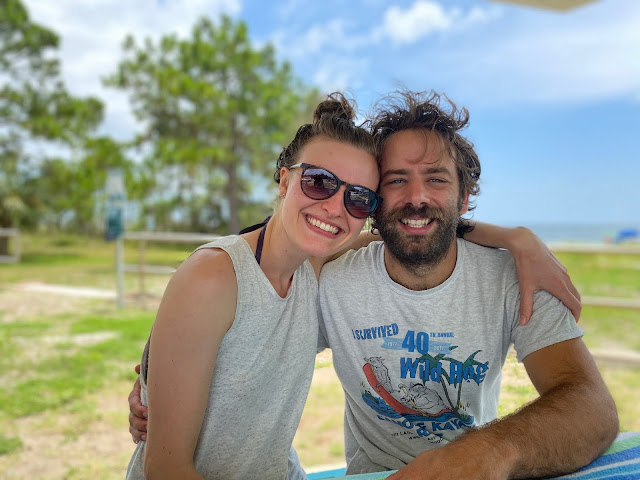 Posted by cbutterworth at 8:40 PM No comments: 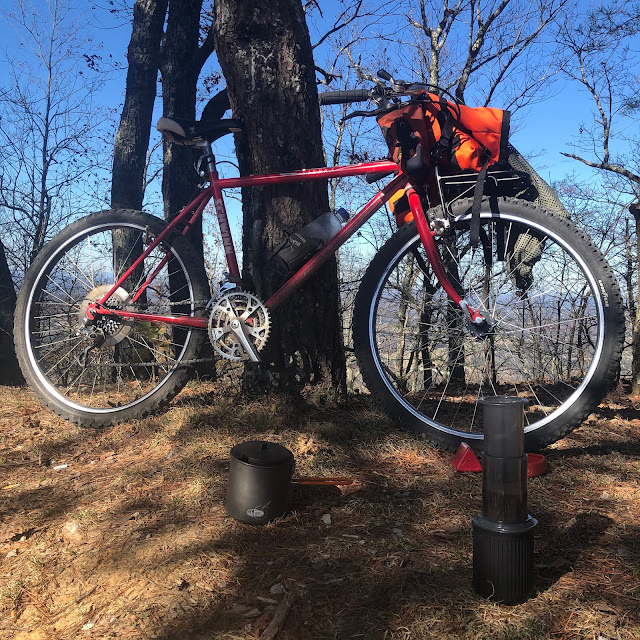 About the ride: Let us pause here and give thanks for the great names that the South has given to its geographic features; names like "Mulepen Gap," "Big Frog Mountain," and "Junebug Creek" were all seen on this loop around and over "Bean Mountain." I rode this loop alone. It was supposed to be a fun solo ride, challenging but lollygagging enough to clear my head and de-stress. I was psyched on the route I mapped out but by the end of this ride, I puked, I cried, and I (knowing how over-dramatic it would sound) asked out loud, "when will death come?" While definitely not the longest ride I've ever ever done, it was most definitely the hardest. And being chased by two country pit bulls (not to be confused with their more benign counter-parts, "city pit bulls") up a steep muddy hill absolutely did not help.

Was it fun? No. I distinctly remember yelling at one point, "THIS IS NOT FUN!" Am I glad I did it? I guess. Would I do it again? Not for a long time. Or at least that's what I thought until I started driving home, belly full of Burger King. The closer I got to home the more I began to think you know, that wasn't so bad. Maybe I'll do it with a friend next time.

About the coffee: I stopped for coffee a few miles beneath the summit at Lillard Gap. A lovely spot with a beautiful view of the valley below. I brought along Velo Coffee Roasters' "Mihuti," a washed Kenyan with notes of peach, lime, praline, and brown sugar. I'd be lying if I said I could pick up on all those flavors but I can pick up that it's good. So good, I experimented all week with all sorts of Aeropress recipes to bring out all that fruit forwardness. When I'm outside, I like a recipe with strong water-to-coffee ratio and a methodology doesn't require a stopwatch. While the following does require a bit of time keeping, it's easy to do it in my head.

Dump 18 grams of coarsely ground coffee into an inverted Aeropress. Saturate the grounds by partially filling the chamber and stir. Let it bloom for 20 seconds, fill to the top and stir again (this recipe uses 220 grams or 8 ounces of water AKA half a baby Nalgene). Let it sit for half a minute and then plunge. All in all, it should take a minute and should produce a strong but bright and fruity cup of coffee.

Coffeeneuring: riding bikes, drinking coffee, seven times, seven places, seven weeks; there's some rules.
About the ride: The Book Club Boys ride again! At the northern end of Lookout Mountain, a proverbial smörgåsbord of gravel and singletrack can be linked together by a series of gravel paths, singletrack, hike-a-bike, and a scenic highway. I call it the Lookout Mountain Adventure Loop and it is my favorite local ride. It's roughly 32 miles and I decided to ride it for coffeeneuring week #6 and my annual birthday "challenge.*"
We rendezvous'd at Reid's at 6:30 and caught the sun rising from the Guild Trail. Mid-November changed the dynamic of the ride completely. The sea of leaves that carpeted the trail made the finer gravel of the Guild-Hardy system lovely and made the extra chunky stuff on the Upper Truck and the CCT's techy singletrack... exciting. The flowy part of Upper Truck, the scenery along Jackson Springs Trail, and the sustained descent down Ochs Highway are highlights for me. Such a fun ride with friends.
About the coffee: We made coffee at the Gum Springs Trail intersection and got lots of strange looks from trail runners. Just some dudes in the woods making coffee. The moka pot is my first coffee love, however it's been largely neglected the past year. This week I returned to my roots and rekindled an old flame. The only "fancy" methodology used here was pre-boiling the water before filling the chamber and placing an Aeropress filter between the grounds and the gasket. The paper filter cuts the acidity and bitterness that the moka pot can be known for but still produces a bold and powerful cup. We split it three ways and cut it with water for trail americanos. Everyone approved.

Date: 11.14.20
Location: 35°00'17.2"N 85°21'12.4"W
Bike: Shanina
Coffee: moka pot americano
Miles: 32 (strava)
*I do this loop regularly and recognize that 32 miles on a bike is not all that impressive. Therefore, this birthday challenge is neither spectacular nor particularly physically challenging. This year, the focus was FUN.
Posted by cbutterworth at 10:32 AM No comments:

On November 25, 1863 federal forces, commanded by General Ulysses S. Grant, sandwiched Confederate troops on a small ridge on the eastern edge of Chattanooga. Maj. General William Tecumseh Sherman attacked from the north and Maj. General Henry Thomas from the south. It was a decisive victory for the Union that changed the tide of war and opened the South up for Sherman's march to the sea.

On November 7, 2020 Rebecca and I rode our bikes up and along the ridge, following the same trajectory many of General Thomas' soldiers did. As a social studies teacher and lay history nerd, this fact is not lost on me. 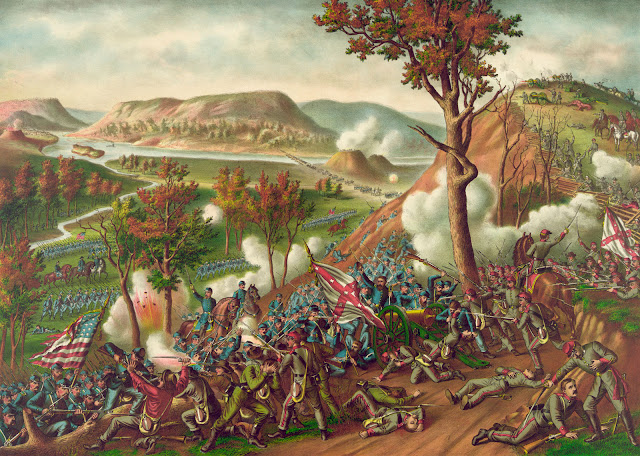 About the ride: This is my favorite city ride which circles the "main" part of Chattanooga. The ride begins with a climb up and then along the rolling Missionary Ridge (S --> N). It passes luxurious homes, 19th century cannons, plaques, monuments, and statues and aside from six-mile long history lesson, Crest Road offers up endless views of the city valley, Lookout Mountain, and Tennessee River. North Crest ends with an exciting and fun descent down into the Glass Farms neighborhood before it rides along South Chickamauga Creek. Finally, the ride cruises along the river-walk and around the city and ends back home in Ridgedale.

This was Rebecca's longest bike ride and it was so much fun to hear her cooing at the hard-earned views laughing through the well-deserved descents. She was even talking about a half-century and another triathlon by the time we got home! I truly loved sharing this ride with her.

About the coffee: We stopped at the Bragg Reservation at the southern end of the ridge and made coffee in beneath beautiful autumnal leaves and a monument to the union forces from Illinois. No specialty or fancy coffee this week, just some tried and true coffee made in my trusty aeropress; standard brew method with a 14:1 ratio. I ran out of fuel before I got a good boil going but plenty of "fisheyes" in the pot was hot enough. Aeropress recommends 175 degrees anyway, right? A little kid wished us a "good picnic... or coffee business... or whatever you're doing!"

Coffeeneuring: riding bikes, drinking coffee, seven times, seven places, seven weeks; there's some rules.
Better late than never. The devils conspired against me this week. And it seemed like the fourth coffeeneuring ride might not happen. Reid and I could not get our schedules to align. Yesterday's solo ride didn't happen either. But today, I prevailed and squeezed in a quick ride around the neighborhood with Rebecca and made an extra delicious cup of hyper caffeinated coffee to fuel our election results watching.

About the ride: We were squaunched for time -- a new pup at home, the sun setting an hour earlier, and election results that my job requires me to watch and pay attention to -- so we rode around our neighborhood in Chattanooga's southside: Ridgedale. We love our neighborhood and its quirks and charms: abandoned factories, pit bulls on chains of unknown lengths (we have a pitty now too but she stays inside), and corn growing in front yards.

I rode my tracklocross bike which is never not fun and always makes me feel a little more punk rock. It bunny hops manhole covers, jumps ditches and curbs, rips back alley gravel, and is just an all around funhog. I love singlespeeds. And if I ever get a "real mountain bike", it'll have one forking speed.

The best part was that Becca came along and we got to talk about our days and the election and it was really quite nice albeit way too short.

About the coffee: The short, flat ride allowed me to splurge on the coffee this week. I made a version of "Tennessee Molasses," an aeropress brewed coffee infused with Dr. Pepper, which I would order as a treat from The Well Coffeehouse in Nashville when I would visit Rebecca there. Here's the recipe:
Date: 11.3.20
Location: 35°01'33.8"N 85°16'12.8"W
Bike: tracklocross rig AKA "The People's Bike"
Coffee: aeropress brewed Perc Coffee Guatemala Asprocdegua, infused with Dr. Pepper
Miles: 3.5 (strava)

Posted by cbutterworth at 7:46 PM No comments: